Your guide to doing business in Lithuania

Situated in Northern Europe, Lithuania is the largest of the Baltic States, and is bordered by Latvia to the north, Belarus to the east, and Poland to the South. Its southeast border connects to the Russian enclave, Kaliningrad Oblast while its west coast meets the Baltic Sea. Following reforms in the 1990s, Lithuania became one of the fastest growing economies in the EU with falling unemployment levels and a highly skilled and multilingual workforce: over 50% of Lithuania’s population speak more than two languages and EU citizens do not require a permit to work in the country. Lithuania is a gateway to a range of lucrative markets, with free-movement road and rail routes to the rest of the Eurozone and four international airports. Lithuania is a stable, democratic republic with a business-friendly tax environment and an excellent communication infrastructure. In 2019, Lithuania had an estimated GDP of $54 billion, with a growth rate of 3.9%. Lithuania is a member of the EU, the UN, NATO, the OECD, and the Nordic Investment Bank, and was ranked 11 on the World Bank’s Ease of Doing Business Survey 2019.

Registering a Company and Establishing an Entity in Lithuania

Businesses can be set up electronically in just a few days provided the entity’s establishment documents comply with the standard forms of documents. Companies will need an in-country bank account in order to register, this generally takes no longer than one day to complete. In order to reserve a company name, the Register of Legal Entities and the Centre of Registers must be visited for an electronic signature.

Lithuania currently ranks 14th in the world for ease of business according to the World Bank’s Doing Business 2019 report.

It is not mandatory to make payments to employees and the authorities from an in-country bank account.

Most banks open at 8am and close early, normally around 3pm.

What Are the Working Days and Working Hours in Lithuania?

Full name: The Republic of Lithuania

How Do I Say in Lithuanian?

Numbers are written with a comma to separate thousands and a period to denote fractions. For example, €3,500.50 (three thousand five hundred euro and fifty cents).

The tax year runs from 1 January to 31 December.

It is not necessary to be licensed to make any tax and/or social security filing on behalf of a customer.

The Key Legislative Authorities in Lithuania are:

State Labour Inspectorate of the Republic of Lithuania

Employment Department Under the Ministry of Social Security and Labour

Penalty for late payment is charged at 0.03% interest for each delayed day.

The tax calculation below is prepared on the assumption that: 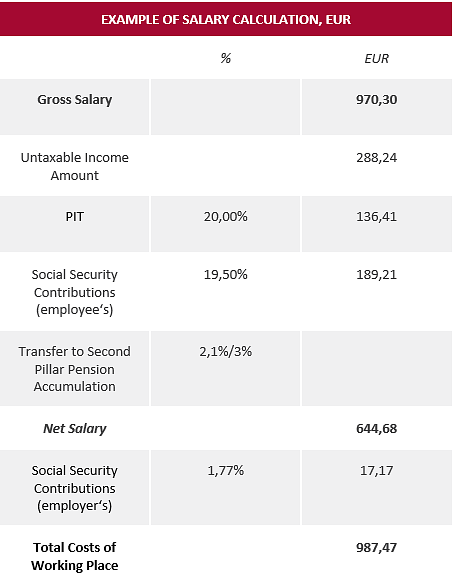 Information required to complete form:    Total amount of earned and paid salary during the current month.

The documents should be sent to the Tax Authorities by the 15th or last day of the month.

The documents should be sent to the Tax Authorities by 15th February of the next year.

New starts must be registered by submitting form 1-SD (notification about the beginning of the personal social income) to the Social Security Tax Office no later than one day before the employee begins work.

The employer should make final payment to a leaving employee on their last working day. If the payment is delayed, the employer will pay interest for each delayed day. The Social Security Office must be informed of any leavers by submitting a 2-SD Form (notification of termination) within one working day of the dismissal.

If an employee accumulates additional pension funds, the government contributes an additional 1.5%. If the employee wants to pay more from the beginning, he/she should notify the company of pension accumulation.

It is legally acceptable in Lithuania to provide employees with online payslips, these are normally provided via email.

Payroll process options may be as follows: