Malaysia can be a challenging tax environment, however, like most jurisdictions, it imposes certain special regulations on expatriate taxpayers, and how they pay income tax. Mandated by the Income Tax Act of 1967, these rules principally relate to the time expat employees spend in the country - a factor which classifies them as either ‘resident’ or ‘non-resident’.

Given the importance of residency status to Malaysian income tax, as an expat in Malaysia, or as an employer with an expat employee population, it’s important that you understand your liability. Use this guide as an introduction to some of the key regulatory issues.

The most important factor for determining expatriate tax liability in Malaysia is residency status, which essentially refers to the amount of time an employee spends in the country.

Certain other criteria - set out in the Income Tax Act - may confer resident status on an employee. Those criteria are as follows:

Non-residents: Non-residency status, by contrast, is applied to employees who spend less than 60 days in Malaysia: these employees do not pay income tax in Malaysia.

Income tax exemption: Beyond non-residency status, employees in Malaysia may also exempt from paying income tax if they:

Income tax in Malaysia is unusual in the sense that it is applied on a territorial basis, which means, only income sourced from Malaysia is liable for tax. That condition applies for both residents and non-residents - and regardless of where taxpayers are paid. Some exceptions to territorial taxation apply:

Expat employees classified as residents must pay tax according to Malaysia's progressive system. There are numerous tools and resources available to help calculate tax liability. In more detail, however, Malaysia income tax rates fall into the following bands: 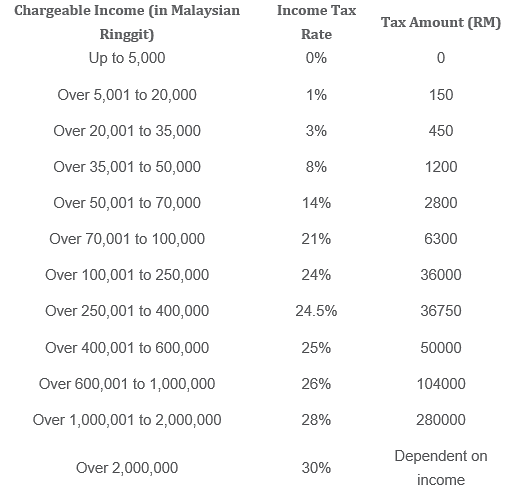 Malaysia’s Tax Year follows the calendar year, running from 1 January to 31 December - and all tax returns must be returned by 30 April in the following tax year.

In order to file an income tax return, an employee must have a tax number - which can be obtained from the Inland Revenue Board of Malaysia (IRB). It is a standard practice for employers to obtain income tax numbers for their expat employees, but if this is not the case, individuals may obtain their number from an IRB office.

Obviously, it is vital to exercise care and consideration when filing income tax as an individual: IRB may impose fines of up to 200% of uncharged tax if an error is discovered. Beyond error penalties, late submission of income tax returns may incur fines of up to 45% of payable tax.

Or for more information about the recent changes to the Minimum Wage in Malaysia check out our coverage in the News Section of our website.

Note, this article was originally published on the 21st of September 2018, it has been updated to ensure the information is up to date.