On 1 October 2019 Japan raised its consumption tax from 8% to 10%, a move which had consequences for the price of almost all goods and services in the country (with some exceptions). The consumption tax rise also directly affected the price of public transport in Japan, and in particular the price of rail tickets. Before the consumption tax rise, 21 Japanese train operators - 5 from the Japan Railway (JR) group, and 16 private companies - filed an application to the Ministry of Land, Infrastructure, Transport and Tourism to increase fares.

Rail transport is famously popular in Japan where train networks are used by around 25 billion passengers. Japan’s train network is especially important to the country’s employee population: in Tokyo alone, 40 million passengers use the train every day to get to work - so the increase in train fares is set to affect a large proportion of the Japanese population. The last time companies from the JR Group increased fares was 2014, which was also the date of the last consumption tax rise (from 5% to 8%). In fact, for some companies, this is the first fare hike in a long time: JR Shikoku and JR Kyushu, for example, have not increased fares since 1996, while JR Central and JR West fares haven’t increased since 1987.

With many businesses in Japan accommodating their employees’ commuting needs by offering a commuting allowance amongst other benefits, it’s important that employers understand how the increase in train fares will affect them.

To accommodate the increase in consumption tax, Japan’s rail companies have increased the price of rail fares by an average 1.85% - effective 1 October 2019. The rises in train fares are obviously not consistent across all rail companies, however, in more detail, the 5 JR companies have changed their fares as follows: 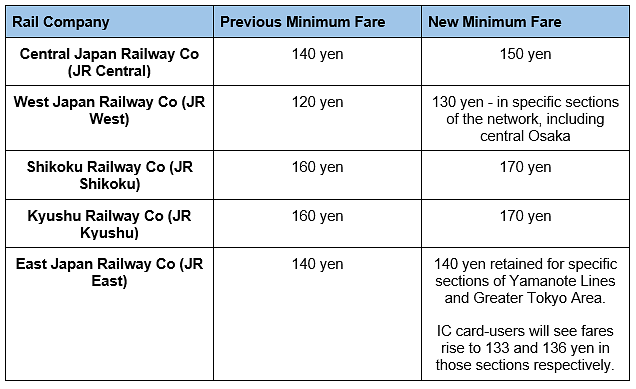 Many Japanese employers offer transportation or commuting allowances which are non-taxable and can be used to cover some or all of their employees’ monthly bus and rail costs (up to a value of 150,000 yen).

Since the rail fare hike will affect a large number of commuting employees in Japan, employers should reassess their commuting allowance budget - and the impact the change might have on their wider benefits system. Since the fare hike is the first since 2014, and the first in decades for some companies, it’s important that the new commuting landscape doesn’t catch businesses out, or cause disruption for employees.

Foreign companies in particular should look closely at their mobile employees’ transportation budget and ensure their global payroll infrastructure had adapted to the change.