Our Implementation teams in Aberdeen and Manchester have been out and about, as part of a combined team building and CSR day, to lend a helping hand to local homeless charities in their areas.

In Aberdeen, the team visited Street Friends, a not-for-profit group that supports those in need who are living and sleeping rough in and around the city centre. The volunteers deliver support packages containing essential items such as food, sanitary products and pet food. Jade, Abbi and Beth headed out to learn more about the group and the people they aim to help.

In Manchester Wendy, Daniel, Jodie and Robert visited local charity Coffee4Craig which supports homeless people in the area. Once there they offered practical and logistical support and learned about the difficulties the clients faced.

Street Friends is a community organisation that volunteers 7 days a week to supply services to those in need around Aberdeen City Centre. The group was founded by an individual who started off buying food items such as sandwiches and handed them out to those in need around the area. Slowly but surely, he grew this group and began receiving donations from local businesses and individuals to distribute. At present the group has a base above Café Nero on Union Street / Market Street which is generously donated by Café Nero. The team use this to collect and store donations and to prepare their supplies each morning before going out on the streets. They are 100% non-profit and rely solely on donations and volunteer work – they are currently applying for Charity Status.

A typical day for a volunteer would be to meet with the team at 10am at base, spend 30 mins packing service trollies (teas, coffee, hot chocolate, food items, pet food, woman’s sanitary products etc) The team then has a set route around Aberdeen city centre which commences at 10.30 at Marks and Spencers. They travel to the opposite end of Union Street and back on a loop over the course of around 2-3 hours. During this time the volunteers prepare hot drinks, food items (such as pot noodles) and distribute food bags with whatever donations were received the day before. These are typically biscuits, crisps, juice, bakery items, sandwiches etc. Due to legislation around food labelling the team cannot actually prepare and distribute food / hot meals – it must be pre-packaged and issued. They also take requests from service users for additional items such as sleeping bags, clothing, children’s items etc. Once these have been sourced they meet up with the client at a set time / central meet point. These are usually brought along on the next day’s group outing unless critically required.

We joined the team over Thursday and Friday and really enjoyed the experience. I think going into it we almost had a preconceived notion of what it was going to be like and the type of service users that we would come across. We were surprised of how different it actually was. We came across many different people from all walks of life, and I think it was a bit of a reality check for us all to see that anyone can end up in this position through bad luck or circumstances out with their control. On our routes we handed out items to approx. 40 people and also secured a new donator with the Vegan Bakery on the Castlegate so all in all a successful couple of days work! 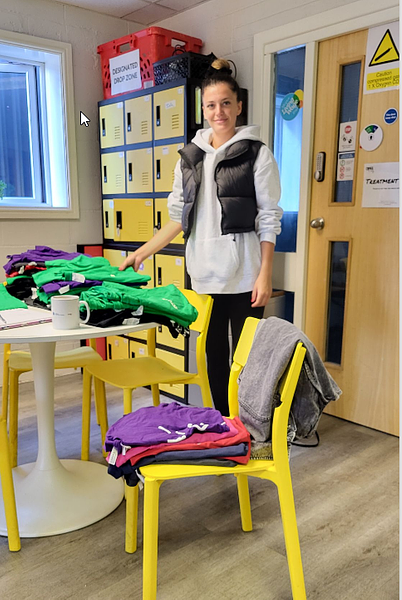 We visited Coffee4Craig in August where we had a very successful morning helping Elle and the team with various elements in the building which they just don’t get time to keep on top off. Hopefully we made an impact to their day. We helped with the food deliveries, checked and organised stock levels, and managed their donations by categorising what they can use for their guests, what is not suitable, and if they could sell it on eBay. Any money they raised from Ebay goes towards purchasing socks, underwear, tracksuit bottoms, and toiletries as these are the items they use most each day.

The morning began with a full briefing on the whole Coffee4Craig, how it was founded and how it has become what it is today. It was really interesting to listen to how they started off with the charity, and how it is really close to their hearts as the founder of the business brother died from a heroin addiction and overdose. He then went on through social media and many other areas, to link up with other homeless charities in Manchester and learnt the ropes on how and what he needed to do to succeed. He went forward to grow Coffee4Craig to what it is today. It started very small, to now having its own premises in Manchester city centre. They are currently a unique organisation being the only charity that is open in the evening offering meals to the homeless. They generally have around 60 guests each night that they cook for, offering quality healthy food to the needy. They offer at least 2 options and a pudding! Custard apparently is a big deal for the guests and has to be part of the menu.

They also offer a multitude of other things - showers, washing / drying clothes, haircuts, first aid and provide clothes, toiletries and sanitary items each night. There is a social element in that the guests can chat and play a number of games, or read books if they prefer. They have a reigning champion chess player who has not been beaten yet, which he is very proud of. Many of their guests are drug users and have a multitude of issues including mental health – the team has built relationships with the guests and have become a huge part of their lives.

We learnt about the difficulties they are under and how easy it is for their guests to have access to drugs - the area if renown for this and just around the corner anything is easily obtained. They can only do what they can but generally they work until 10 am – 10pm each night including Christmas.

In Elle’s words ‘Christmas is a lovely time here and I wouldn’t want to be anywhere else on this day’ which was very heart-warming to hear. They have paid staff, which all get paid the same rate from the cleaner to the CEO. They also have many volunteers from different walks of life, many of them been through similar situations themselves and now helping others.