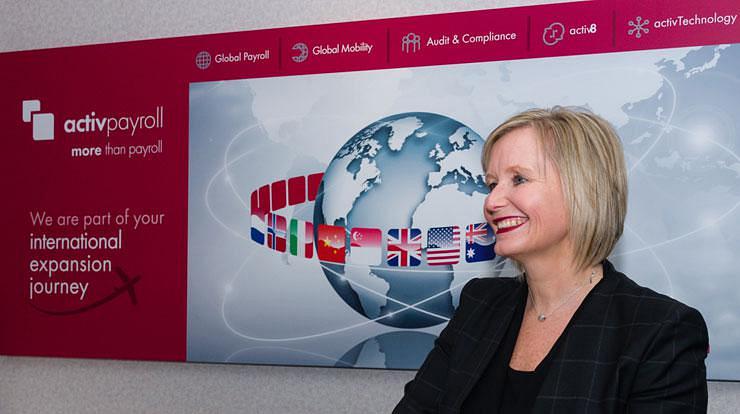 Alison Sellar launched activpayroll in 2001 in Aberdeen, North East Scotland. The company is now in its 19th year of successful business, servicing more than 1000 customers and operating in over 140 countries around the globe.

From a young age, Alison worked in her parents’ firm, Grampian Business Bureau, and had several part-time jobs. She then became a partner in the firm in 1999 and asked her father if she could grow the payroll department which she was running. It was agreed that Alison would launch a separate company: activpayroll.

activpayroll was set up as a local firm specialising in payroll for the oil and gas market in Aberdeen. Now operating in 140 countries, activpayroll started off with just one Aberdeen-based client and has expanded from there. The first overseas office was opened in 2005 in Perth, Australia and it was during this experience that the challenges to be faced in becoming an international business became clear. Despite the difficulties, Alison overcame all obstacles; breaking through cultural, distance and language barriers. Not to be underestimated are the differences in payroll and tax processes around the globe which have been surmounted whilst establishing a network of international offices and managing diverse payroll teams.

Alison has built one of the strongest global teams of specialists in payroll, expatriate tax and human resources and attributes the spectacular global success of activpayroll to filling a distinct gap in the market for fully integrated payroll services. Anytime Alison is praised for her tremendous efforts and success, she states that it is all about her team and the people that have got het to where she stands today.

activpayroll’s growth strategy has been carefully planned to establish us as the leading global provider of payroll, expatriate taxation services and online people management tools.

We are achieving this in two ways:

In the first place, activpayroll is building its customer base by developing core technical expertise in several key industry sectors including: Investment, Oil and Gas, Construction, Aviation and Technology.

We are also targeting international businesses that require a complete global payroll service. This has led activpayroll to take on local offices in other countries and allows us to compete with the major players in this industry.

My ultimate vision is to build on our payroll expertise to offer full-scope tax advisory and compliance services on a global basis. The biggest challenge, I believe, in achieving this is to develop products and services that help organisations understand and control the cost of managing their most important asset: their people.

Alison has won a number of business awards.

The Asset Triple A Asian Awards

Export Business of the Year

Director of the Year

Partner of the Year Award

Influencer of the Year

Honoured with an OBE in the Queen's New Year's Honours List

Global Payroll Supplier of the Year

Private Business Woman of the Year

Female Business Leader of the Year

Best Company to Work for in Payroll

Most influential in Global Payroll

The Grampian Awards for Business Enterprise

Entrepreneur of the Year

The Grampian Awards for Business Enterprise

Young Entrepreneur of the Year

Female Director of the Year

The Institute of Directors Award

Alison is very passionate about helping others and in 2011 launched an innovate payroll giving scheme called ‘Pennies for Promise’, enabling employees to make a donation to charity directly from their pay. Outside of work, Alison is equally ambitious, often found to be skiing, downhill mountain biking or at the gym preparing for a new adventure. She has participated in The Monster Ski Challenge to raise funds for the MS Trust skiing 100,000’ over three days, the equivalent of skiing down Mount Everest for three days in a row. In 2016, Alison took part in two gruelling cycles as part of activpayroll’s 2016 CSR campaign #activAlison. The campaign raised funds for four charities: Maggie’s, Women V Cancer, Chest Heart and Stroke Scotland and Friends of Anchor. In August, Alison completed Ride the North, a 281 km cycle over two days through the Grampian highlands in the North of Scotland. In November, Alison travelled to Vietnam to take part in the Women V Cancer challenge, a 450 km cycle over six days, starting in Vietnam’s Ho Chi Minh City and finishing at the world heritage site of Angkor Wat in Cambodia. In December 2017, Alison was honoured with an OBE on the Queen's New Year's Honours List.

Despite her hectic schedule, Alison has also found the time to become a GlobalScot Trade Mission Ambassador, a task she tackles with relish and ability. GlobalScots are a diverse network of business leaders, entrepreneurs and executives with a connection to Scotland and a strong desire to see Scottish businesses succeed both locally and globally. As a GlobalScot, Alison directly assists companies in entering new export markets using her expertise and global connections. She also identifies opportunities for businesses benefiting Scotland by supporting key growth sectors and providing strategic advice to Scottish Enterprise, Scottish Development International and their partners.

I’m a great believer that if you’re in a position to help other businesses, you should make the effort to do so - and I’m happy to share my experiences with other business people.